In January a small group comprising amongst others, Pete Sims, initiator of the 38 Degree petition, Piers Telemacque, National Union of Students and Julie Hilling, MP, former youth worker and past President of CYWU is meeting with Tristram Hunt, Labour’s Shadow Education Secretary to discuss the need for a statutory funded, universal Youth Service. Of course there is the pressing question of much needed finance for youth work, but there is also the crucial issue of educational philosophy. What do we see as the purpose of education, formal and informal?

For now I will merely post some extracts from a speech made by Hunt earlier this week and ask if we ought to be a touch concerned.

“The great British spirit comes from our ability to overcome adversity and setbacks.”

“Character, resilience and the ability to bounce back: it’s what makes us British.”

“As our young people face growing rivalry for jobs, high-status apprenticeships and the best university places, it becomes more and more important for schools to coach pupils about character.

“Because we learn best from the knockbacks that we receive, that is the message that schools must send to pupils.

“I want to see the great British spirit in all our classrooms.”

Mr Hunt was speaking at a conference calling attention to the present government’s £5 million pound Character Innovation Fund, which, amongst other things, will allow former armed service personnel to run eight projects across England to develop self-confidence respect and leadership in disadvantaged young people. Those involved in youth work across the decades will be in raptures about the remarkable initiative being made by DEMOS, one of those robust and rigorous think-tanks we hear so much about.  Its Chief executive Claudia Wood has announced that a number of pilot projects are investigating how extracurricular activities such as sport, social action and volunteering could transform pupils’ self-esteem and self-reliance.

“People might call it grit, resilience or skills for the 21st century, but there is a growing consensus from all parties that character matters, and that policymakers can help develop it from childhood,” argues Ms Wood. 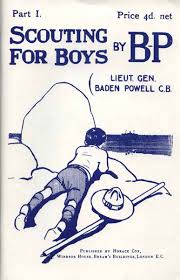 Now far be it for me to suggest that the notion of character might be a contested concept. For now I’m off to read afresh a favourite book of mine, Baden-Powell’s ‘Scouting for Boys’, full of contradictions, full of humour. Our earnest researchers and populist politicians could have saved themselves a lot of time by buying the excellent new edition of this classic youth work text!

For another slant on Tristram Hunt’s call –  see ‘We don’t need Winston Churchill in the classroom.’