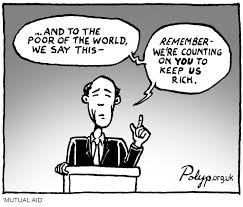 We continue to live through neo-liberal times. Across four decades neo-liberal economics and its accompanying ideology have become the common-sense of our time. Ironically though within our IDYW discussions it is quite common for people to express uncertainty and confusion about what neo-liberalism means exactly. It’s true too that some of us can fall into the trap of using the term to describe anything and everything we don’t like! In an effort to shed light on these matters we are opening a page devoted to articles exploring, analysing and criticising neo-liberalism. We hope these texts will prove useful and illuminating.

– What is Neoliberalism? Dag Einar Thorsen and Amund Lie Department of Political Science, University of Oslo.

‘After Neoliberalism?’ has taken the form of a twelve part online analysis of the current economic crisis and the ensuing social and political conjuncture, primarily within the UK but also in its wider global context.

The authors argue that this is a potential moment for changing the terms of  debate, for reformulating positions – for taking a leap. Their concern is therefore not so much to secure the election of an alternative government as to encourage a debate that goes beyond neoliberalism and fears of what ‘the markets’ might tolerate. They believe that the neoliberal order itself needs to be called into question, and radical alternatives to its foundational assumptions put forward for discussion. It is the Kilburn Manifesto simply because all three editors have long lived in and around that neighbourhood.

We will post links to the twelve instalments over the next few weeks.

Part One : Analysing the Present by Stuart Hall, Doreen Massey and Michael Rustin