Changing the World Together Through Film, June 6

Message from Lucy Pearson at RefugeeYouth:

I am writing to let you know about our film festival Refuge In Films. We have a 1 day event at the British Film Institute on the 6th June which is aimed at bringing together young people to watch films, do some film making workshops and get inspired to make their own films and get involved in creating the big public festival which will happen in November.
We wondered if you are working with any young people who might like to get involved. If there are a few we have an outreach team who could come and visit and tell young people about it and invite them to get involved. If you think this is possible let us know when is a good day and time for you. 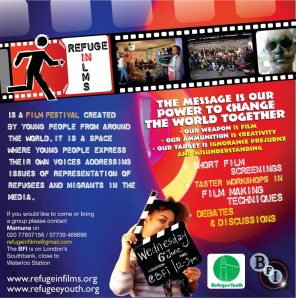