Education has become like running up a down escalator 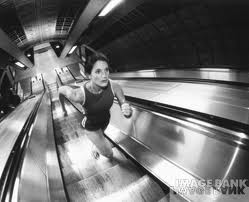 An excellent succinct summary of the changing relationship between educational qualifications and social mobility from Martin Allen and Patrick Ainsley. Whilst aimed at teachers it demands the attention of youth workers. This is especially the case, given the increasing and problematic use of youth workers within schools on the grounds that we will contribute ‘magically’ to improvements in social mobility.

‘On the other hand, it’s argued that young people have been largely ‘pushed’ into staying on as the sorts of jobs that used to be open to youngsters have disappeared. Rather than there being major skills shortages in the economy, there is a ‘jobs queue’ for employment. Gaining particular types of qualifications, or ensuring that you attend certain universities allows you to move further up the queue.

At the same time, the education system is increasingly like trying to run up an escalator that is going down. Just as you have to move faster and faster to stand still, in schools, colleges and universities, you have to work harder and harder, simply to keep up with everybody else! Far from upward mobility, many fear losing their place in the jobs queue and ending up worse off than their parents.

So it’s not that education has failed the economy, as politicians and business leaders constantly assert, and more that the economy has failed education. Thus, many young people find that after spending years in full-time learning, they are ‘overqualified and underemployed’. Despite increases in tuition fees, young people are still applying for universities in large numbers because they understand that even if many jobs don’t require degrees to do them, with more and more graduates in the labour market, employers increasingly ask for them.’