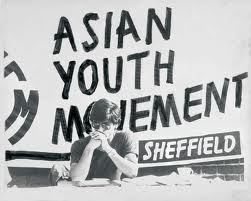 This is a great opportunity to revisit or discover for the first time the significance of the dynamic and influential Asian Youth movements of the 1970’s and 80’s.

Anandi Ramamurthy is Senior Lecturer in Film and Media at the University of Central Lancashire.  She has written extensively on race and representation, commodity culture, social movement and people’s histories.

She will be talking about her latest book, Black Star, which documents the vibrant Asian Youth Movements in 1970s and 80s Britain who struggled against the racism of the street and the state.

The primary identity with which South Asians are framed in Britain today is a religious one. Black Star is an important addition to the discourse on South Asian identity as it highlights the political identities within South Asian communities through an exploration of the Asian Youth Movements. These organisations were inspired by left and anti-colonial traditions in their struggle to transform society and campaign for social and political rights.

At the launch, Anandi will outline why she documented this history, the contribution of the Asian Youth Movements to the anti-racist struggle in Britain and consider the lessons and legacies of the movement in the context of politics in Britain today.