Facing the Future : Savage Capitalism – A System Beyond Reform? 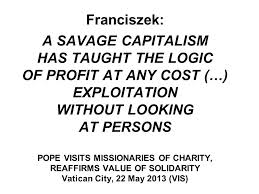 From time to time word filters through that some folk within youth work object to the C-word. Indeed they never use the C-word – hardly surprising as this would involve entering seriously the pressing debate about the future of humanity and indeed the planet. They prefer to be pragmatic. Burying their heads in the sands of the instrumental and technical their fixation with individual outcomes transforms public concerns into personal issues. Young people just need a dose of positive psychology and structural barriers will simply melt away.  Meanwhile Capitalism, the C-word, continues to fester, widening rather than narrowing inequality.

You don’t have to agree with David Graeber’s, Savage capitalism is back – and it will not tame itself or indeed the Pope’s comments on the ‘dictatorship of the economy’, but I don’t see how a reflective practitioner can escape the questions posed.

And if Graeber is too academic and the Pope too religious, there’s a splendid rant by bullingdonmoron.

You really do have to be an utter moron to support this system.

Decades from now, history books will record these years of Neo-Liberalism as the dumbest period in human history. They will tell of a system that created vast wealth for a handful of people whilst leaving millions struggling to survive, a system designed to transfer wealth from the poor to the rich, a system that promoted a Malthusian hatred of the poor and a complete indifference to the plight of others whilst extolling the virtues of greed and ignorance.

The last 10 years spanned the worst financial crisis in history, a crisis caused by the sheer greed and criminal behaviour of the richest people on the planet aided by the very deregulation and free market ideology that the right wing so craves, and was only solved by using billions of taxpayers money.

And this is happening right now, IN ONE OF THE RICHEST COUNTRY ON EARTH.

The ruling elite already own all our land, gas, electricity, railways, water and media. They are now coming for our pensions, our NHS, our roads, our schools and our green spaces. They have systematically destroyed the unions, dismantled our protections, created mass unemployment and are dismembering the welfare state. They make it easier to sack us, make us work longer hours for less pay, force our kids to work for nothing, raise the retirement age whilst cutting our pensions and weaken our health and safety laws. Yet executives of blue-chip companies enjoyed a median pay rise of 32% in the last year alone.

We are being shafted.

Someone that tells us that our kids can still have hopes and dreams.

To paraphrase Lloyd George whilst talking about the Great War: “If the people really knew the truth about what was happening, it would be ended tomorrow, but they must never know.”

Well, it is time we did know, and time we all stood up and said, enough is enough.

Fair enough, you may think this is over the top, but surely it’s not possible to remain silent in the face of the consequences of neo-liberal austerity. What do you think is going on in the realm of the economic and political and what do you think we should do about it?

Thanks to Joe Taylor over at NATCAN for the Graeber link