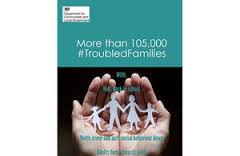 An unfavourable evaluation of the government’s flagship policy response to the 2011 riots has been suppressed, BBC Newsnight has learned.
The analysis found that the Troubled Families programme had “no discernible” effect on unemployment, truancy or criminality.
The initial scheme sought to “turn around” 120,000 households at a cost of around £400m.
The local government department denies that the report has been suppressed.
A spokesperson said: “There were several strands to the evaluation work commissioned by the last government and there is not yet a final report.”
The report, which the government has had since last autumn – and seen exclusively by BBC Newsnight – is embarrassing for ministers, who not only implemented the scheme, but have since decided to extend it. Officials have told Newsnight that they believe it would have been published, had it been positive.
Ministers had trumpeted previous data related to the scheme, which had suggested that 98.9% of families participating in the scheme had been “turned around”.
Furthermore, a second wave of the Troubled Families programme was announced in June 2013, and began to roll out in April 2015. It covers another 400,000 families at a further cost of £900m.
The “troubled families” programme was aimed at those affected by high unemployment, truancy and anti-social behaviour.
The scheme was intended to save money and prevent future rioting by reducing the problems of this group of disadvantaged families.
A senior civil servant told Newsnight that the report is “damning”, and attacked the scheme as “window-dressing”.

Back in February we put up a post, ‘Troubled Families is a fraudulent scam’- some thoughts from within. Clearly we weren’t far off the mark.

Also see the report, The Troubled Families Programme: the perfect social policy?written by Stephen Crossley of the Centre for Crime and Justice Studies.

No social policy can expect to achieve a 100 per cent success rate and yet,
according to government, the Troubled Families Programme has achieved
almost exactly that. The programme has apparently turned around the lives of
some of the most disadvantaged and excluded families in a remarkably short
period of time. All of this has occurred against a backdrop of cuts to local
services and welfare reforms which have hit, not just families, but also the
organisations and councils that deliver services to them. This briefing paper
traces the history of the programme and questions claims of success made by
government and their problematic use of data. Quite simply, the reported
successes of the Troubled Families Programme are too good to be true and
require closer public and political scrutiny than they have received to date.