In this week’s Children & Young People Now you will find an article, Youth work network calls for redistribution of NCS cash. It opens:

Money earmarked for the National Citizen Service (NCS) should be redirected to support cash-strapped statutory and voluntary youth services, a group of youth work organisations has said.

The group in question is the long-standing network of Regional Youth Work Units. And the network’s response to the government’s alleged commitment to a 3-year strategy for young people goes far beyond the matter of Cameron’s vanity project. Indeed we think it is a valuable and challenging contribution to the present debate about the future of both youth work and services for young people. At this very moment, we are exploring whether the network and IDYW might join together to catalyse further discussion. In this spirit and ahead of the appearance of an IDYW paper, ‘Reimagining Youth Work’ you will find below the network’s proposals in their entirety.

What should a 3-year government strategy for young people contain?

The Network of Regional Youth Work Units welcomes DCMS commitment to develop a 3-year strategy for young people. We want to work with the government, youth sector colleagues and young people to ensure that the strategy is a genuine cross-departmental initiative that takes into account the many different factors that impact on young people’s lives and does not concern itself simply with the elements that are included in DCMS’s current brief. We want to see a strategy that fully engages education, health, care, arts, sport, transport and aspires to make England a country where young people are encouraged to feel they are a valued part of the community. 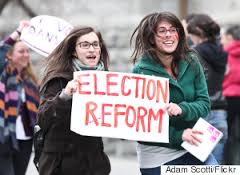 A starting point would be to respond to young people’s demands for voting rights at 16, which would recognise young people as active citizens whose views are as important as other people in the community. Evidence from the Scottish Independence Referendum in 2014 showed that young people used their votes responsibly. There are opportunities coming up in elections for Metro-Mayors where votes at 16 could be piloted and evaluated in England. We urge the government to use these elections to test take-up of votes at 16.

We believe there are some important issues to address for the youth sector itself and want to see these emphasised in the strategy.

The Network of Regional Youth Work Units through its members in regions supports the development of a 3-year strategy and will be happy to work with partners to engage young people and the youth sector across the country.