Stories of Asylum: being patient, taking time and building trust

Sharing and interpreting stories are dear to the heart of IDYW’s desire to explain what youth work is. Hence we are especially pleased to draw your attention to the appearance of a booklet, ‘Stories of Asylum’, the outcome of a year-long relationship between youth workers and young asylum seekers, in itself a testament to being patient, taking time and building trust. 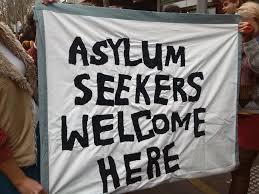 A youth work project in Warwickshire.

As youth workers, we met a group of young asylum seekers through a detached youth work project. We met some of them hanging out in the local park and gradually got to know them and their friends. They were aged between 15 and 19 and came from a variety of countries – Afghanistan, Iraq, Eritrea, Syria to name just a few.

We have been talking to them about their experiences in their home country (one young man left because the Taliban wanted him to wear a suicide vest), their journey here (often ending in a lorry) and their experiences of being in the UK. They were surprised we were interested. No one had asked them to tell ‘their story’ before.

One of the young people expressed a wish to share his story with young people at his school so that they might understand him better. He felt sad that he was called ‘ISIS’ and that people didn’t know the reasons he is here. From that, an idea formed of gathering a range of stories from these young people, printing a booklet and giving it to their school. The young people helped to fill in a funding bid to the local town council to pay for the printing of the booklets.

The story-gathering took place over a year. It needed trust to get the story on paper and time to ensure they were actively involved in the process. Other work took place – trips to get to know their local area; visits to the library to find books they could borrow in their home language; introductions to local places of worship plus some touristy outings.

The booklet is now printed and the second part of the project now begins – ensuring it is used well in schools. Young people are all involved in the promoting of the work, for example, through radio and newspaper interviews.

Stories of Asylum  – the booklet in pdf