Further to my recent post on the return of patriarchy I’ve had a couple of conversations about the how far the concept of intersectionality is influencing youth work practice. A  thread in these chats was the relationship between intersectionality and the notion of identity politics. Were they the same, different, even at odds with one another? Of course, much depended on our definitions of these ideas. For what it’s worth our rough and ready understandings were that intersectionality speaks to the crucial interconnectedness of who you are in terms of relations of power – your class, gender, race, sexuality, disability and faith, whereas identity politics focused on a specific sense of who you are can fail to speak to the connections. Perhaps it needs to be said that we weren’t talking about identity politics as caricatured in a Daily Mail editorial. 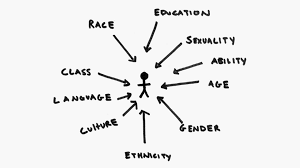 Our tentative conclusion was that youth work practice, where it does engage with relations of power, leans towards identity politics rather than intersectionality. We presumed this tension is present in discussions about power on  Youth Work and allied courses in Higher Education and wondered if any lecturers and students might chip in their thoughts. Then, lo and behold, I tripped over a challenging piece by Sincere Kirabo on Open Democracy, entitled, Why criticisms of identity politics sound ridiculous to me.

The phrase “identity politics” is merely a pejorative blanket term that invokes a variety of ambiguous, cherry-picked ideas of political failings.

I hope you might read the piece in full as it poses many important questions and offers a useful historical backcloth to the emergence of intersectionality as an analytic tool.

Intersectionality is the human condition. It addresses the multiple positions of privilege and disadvantage that human beings occupy and experience in a global context shaped by white supremacy, capitalism, neoliberalism, patriarchy, heterosexism, ableism, segregation and state violence.

Intersectionality upends the single variable politics of being “left” or “right.” It speaks to the very nature of positionality in a world in which it’s impossible to stake a claim on a solitary fixed identity that isn’t informed by one’s relationship to social, political and economic structures of power, authority and control that are themselves rooted in specific histories.