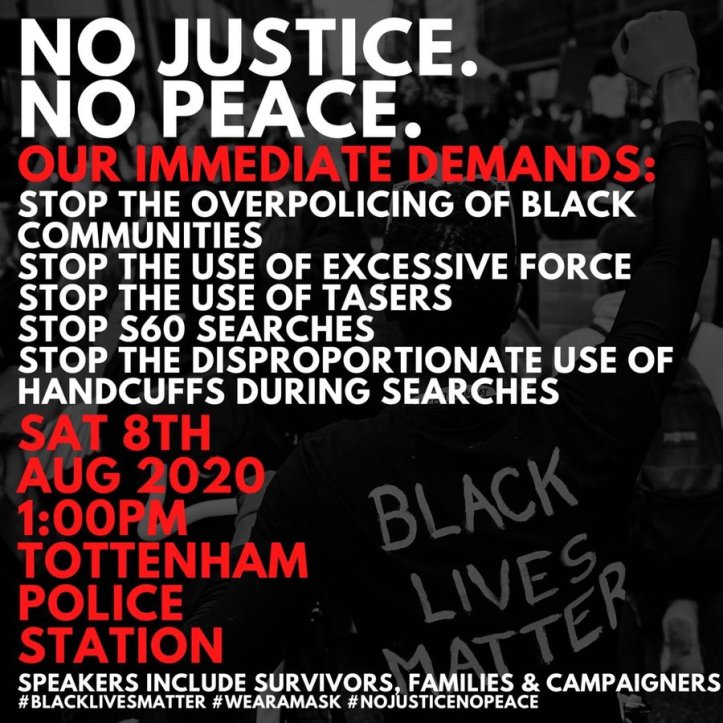 Quoted in the Huff Post, the founder of 4Front Temi Mwale said yesterday,

“This community is sick and tired of the way we’re being treated and now we need your support. We’re meant to be out there tomorrow, Tottenham police station, but instead we’re out here at Colindale police station right now.

“Every day we’re getting arrested in our community for no good reason. It’s the hottest day of the year. We’re thirsty. we’re tired. […] Every single day they come to Grahame Park Estate. […] Stop and search, strip search, the lot of it, we have it. Brutality, punching us. […] We’ve had enough.

“Today started calmly, it started peacefully. Us as community workers […] asking why a 14-year-old was being arrested here today, what has he done, so we can inform his mum. […] They said they didn’t want to engage with us.”

In an interview in today’s Guardian, Temi Mwale said that young people had come to tell their youth workers that a 14 year old was being arrested. The youth workers challenged the police officers, and onlookers sat down in the road to block the police vehicle:

“Here we have enormous issues with strip searches… We have had young people with their trousers down on the main road … this is why we said we don’t really trust what you are doing today….

“They started grabbing people, dragging them across the floor. One person had 10 or 15 officers around him, they were pinning him down with their knee on his neck….

“The young people have got trust in these workers, they have been with them in the police station as appropriate adults… From that point the young people were saying: no, you are not taking them.”

4Front is a community and youth centred organisation that was established to provide a platform for young people harmed by violence to create change, as they explain on their website:

4FRONT was established in 2012 to provide a platform for young people who have been impacted by violence to create change. Since then, 4FRONT has pioneered an approach that empowers the young people most directly harmed by violence and the criminal justice system to be at the forefront of a grassroots movement for change.  We fundamentally believe that there is a difference between reducing violence and building peace.

Our work centres healing and transformative justice whilst directly challenging the UK’s addiction to criminalisation, policing and prisons. This  approach has been shaped and influenced by best practice from around the world. By amplifying our members’ voices and advocating for a holistic approach to build peace, we have transformed the way in which society understands how to support young people who have been affected by violence and shaped the agenda around how to tackle the systemic causes of it. We support 4FRONT members to transform their own lives, whilst uplifting their voices to create change in the system. ​

Our work centres racial justice and empowers members to recognise their strengths and identify systemic barriers to their progress. We specialise in providing culturally specific services, tailored to meet the needs of those with experiences of violence and the criminal justice system who identify as Black (which includes those who are Black British, African, Caribbean and Mixed Heritage). We not only acknowledge the impact of racism and discrimination on our members, we actively work to dismantle these systems.