From Lewisham to Northern Norway and back again.

Building an International legacy for young people in Lewisham

I met Mal in 2009 when I was working at the British Council on the the old Youth for Europe programme and now, for the UK at least, the ill-fated Erasmus programme. One of my hats was Outreach Officer for groups trying to access the programme. As I discussed many times with Mal,  I was sure I was only given that role because I had a south London accent. Whatever the reason, by happy coincidence I met Mal.

From the first meeting we struck up a friendship that would last. We were both from Lewisham and had a similar philosophy on life.

What I soon learned is Mal put young people at the centre of things always. He asked them what they thought, then encouraged them to be what they wanted to be and supported them to do that.

Mal and Katy had been working internationally before that and had built partnerships in the Czech Republic with his friend Joseph Vaclavovic and with Lewisham’s twinned towns.

When I left the British Council, I was able to, and can happily say, worked with Mal and Katy  for 11 years on building and funding international opportunities through the Youth for Europe, Youth in Action and Erasmus programmes for young people in Lewisham.

Bulgaria was the first project I was involved in and 11 years later via Germany, Czech, Portugal, Sweden, Norway, Italy, Greece, Poland, and Spain, Lewisham’s  young mayor and young advisors developed an  international legacy and made some great friends along the way: Mats from Sweden, Maria and colleagues from Portugal and Joseph from Czech Republic to name but a few and of course all the young people.

I know Mal would say in his self-deprecating way, “..it’s the young people that have built Lewisham’s international legacy..”, and that’s true, but it was through Mal’s strategic and big picture thinking (which I know he would hate me saying and would tell me to shut up) that set up and built lasting partnerships.

One of Mal’s passions was European solidarity. Many of the projects reflected that as a core to the project theme. I remember planning meetings trying to define the project outline and Mal would just say, “well, its this…., isn’t it? Don’t over complicate it….” and we went from there. But this belied Mal’s complex understanding of issues around this subject.

Through the Erasmus programme, the Young Mayors team developed democratic engagement and structured dialogue projects.  The projects to Strasbourg, Norway, Czech and Portugal were themed around principles of working with young people to support their exploration and engagement with policy makers and decision makers within their different localities/regions.

One these projects was young peoples’ responses to Brexit. This project aimed to build on our previous projects about what it means to be a European citizen and to strengthen social solidarity. The focus was to give young people a platform to respond to the UK government and to the European Institutions and develop a pathway to continue to allow young people from the Lewisham and the UK to have access to international opportunities in the wake of Brexit. Anyway, the protest was logged through young peoples’ responses to the question.

Our Swedish Partners, who Mal met via the Swedish local government association collaborated with the Young Mayors Team and developed the idea of a European partnership Hub where the partners would discuss the needs of the collective in terms of project themes and ideas. Out of these meetings a project around Youth employment grew into fruition. This project developed with our partners aimed to to increase opportunities and generate ideas for youth employment and self-employment for young people who are NEET.

The wider network of 5 countries explored methods and models in each partner country giving youth workers/leaders the opportunity to see and experience these trainings and employment models and how they work in each country. Crucial to this, which Mal felt strongly about, was the connection between youth democratic engagement and how these relate to transferable skills that young people can use to enter the labour market.

Connecting the local to European was one of Mal’s specialities. The Young Mayors project for the last 2 years, was piloting a programme named ‘Curriculum for life’ – youth workers  responding to the needs of young people who have repeatedly and consistently indicated that they need something more than what mainstream education delivers. A programme to help young people navigate life after school. We piloted a programme with local schools that work with young people during work experience and in the school holidays building and developing confidence through experiential learning. The next European project aimed to share this model with our European partners. Mal hosted a Swedish group of teachers from a Folk School Alingsas to present the project and talk about the experiences we had running the project, locally. We had a reciprocal visit planned but, unfortunately, Covid intervened.

One of the outcomes of these projects that Mal and Katy worked on was with our Portuguese partners in Santa Maria de Feria who came over to Lewisham to observe the Young Mayor elections which take place in every school. Every school pupil has a chance to vote for their candidate. The Lewisham Young Mayor model was then adopted by Santa Maria De Feria since then and the partnership has flourished with many reciprocal exchanges.

Mal had made contact with someone in Northern Norway. I knew Norway quite well as I been posted there for a year with British Council. It started a long relationship of reciprocal exchanges with a town called Sortland. We flew to Narvik and the two hour coach trip to Sortland was one of Mal’s favourites; the scenery and geography were breath-taking.

One of the great memories on our exchanges was when we had to hike up a Norwegian Mountain. After some scepticism from the young people it turned into one of the best activities we did.  We had a halfway way stop in a Norwegian cabin and had soup and a couple of workshops then proceeded to the top. Here, there was a hut with bell. When you reached it you rang the bell and signed your name in a book.  It was a really lovely experience: a simple act but brilliant and meaningful for and young people. Most young people highlighted that as the favourite part of the exchange.

Our partnership with Alingsas in Sweden also had great significance for Mal. It was where we developed our partnership hub and did many exchanges, one of them a work experience at a festival in Alingsas. Young people ran and performed at the festival. This was a reciprocal exchange where youth groups from Czech, Portugal and Sweden worked at Lewisham’s People’s Day on the stages’ lighting and sound.

Below: Hub Meeting with in Alingsas Sweden

Below: Mal chatting at a Workshop in a Alingsas Youth Club, Arena Elva 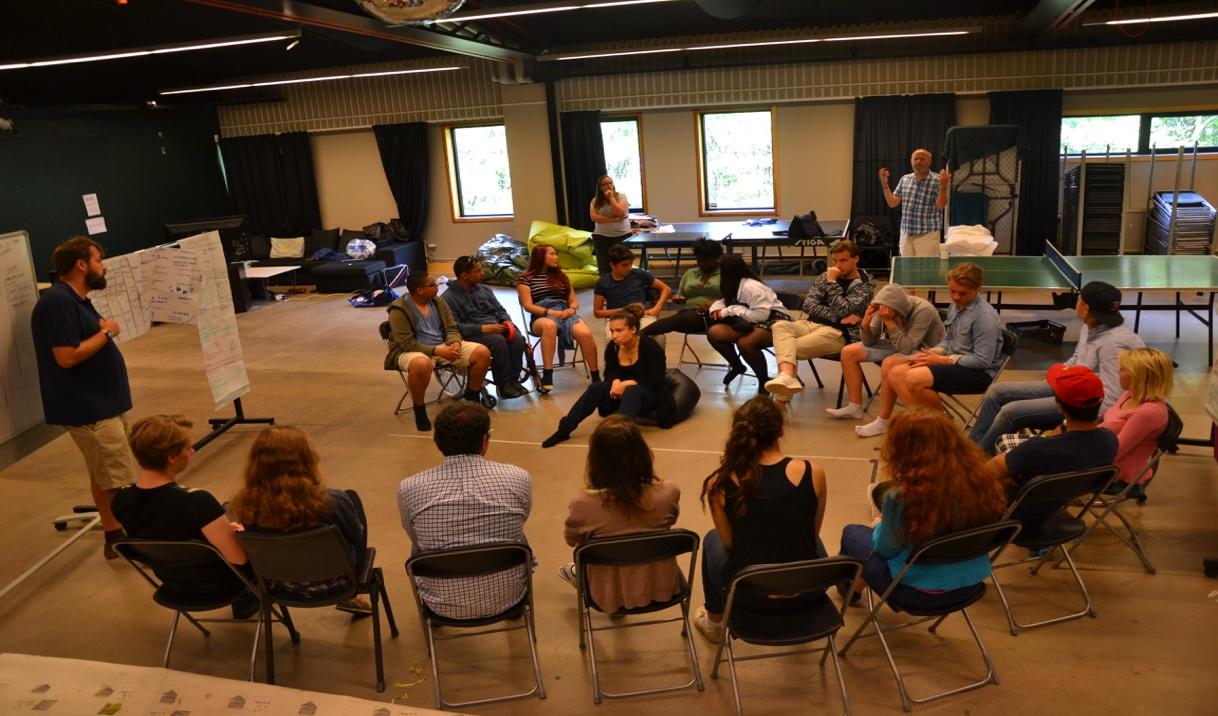 Below: Alingsas Sweden:  Training and work experience project with youth workers project from Sweden Portugal and the UK

Czech was also a destination for many exchanges with Mal’s great friend, Joseph Vaclavovic, who worked with the Prague 7 youth parliament.

Below: Youth Democracy Project at European Commission building in Prague

Below: Mal in Poland with his good friend, Kalbir Shukra, from Goldsmiths’ College.

The European House of Youth Meetings hosted representatives of the Young Mayor project (London, UK). The visit was organised by Pole Dialogu Foundation in cooperation with Civis Polonus Foundation and Goldsmiths College in London. Representatives of Warsaw`s Youth Council, Warsaw`s Districts Youth Councils and Warsaw Education Department also take part in the meeting at EDSM hostel. Young people from Warsaw and London exchanged experience and established relations which will be used in future, common projects.

Below: Mal in Santa Maria de Feria on second part of the Evaluation Project.

Below: Back to LEWISHAM!

In last year of Mal’s life, he talked about the international work with myself,  Katy, and Jacob. He was constantly chatting about plans for the future knowing that he would not be there to see it but that was Mal always thinking of the future and others.

In light of Brexit and our withdrawal from the Erasmus Programme, Mal was planning to take young people to the Council of Europe in Strasbourg to find a pathway to continue to take part in opportunities in Europe. He hoped to continue the work that he was so passionate about.  We will try to continue that work.

I shared many great times with Mal and came to know him as a good friend. I do know for sure that Mal’s legacy will live on through his youth work principles, the young people he worked with and gave a voice to.

Mal, it was a privilege to work with you and to call you friend.

Thanks to Joseph Vaclavovic for the photos.