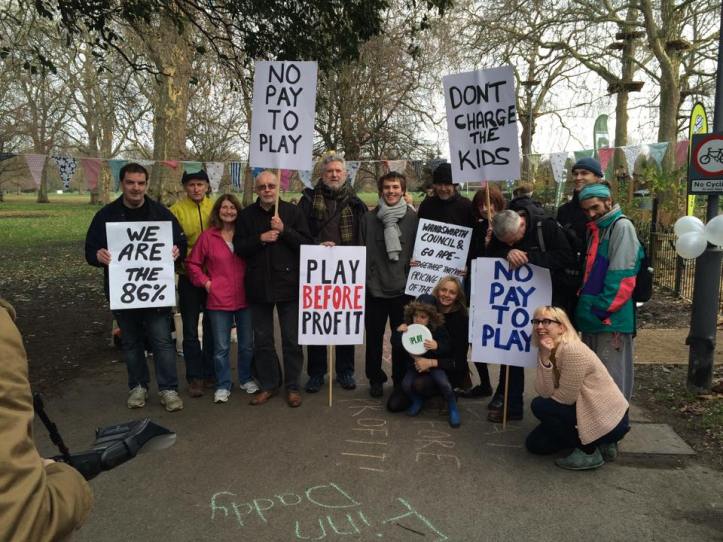 As 2015 comes to a watery close the flood of privatisation continues to engulf the public. The open and free Battersea Adventure playground has been bulldozed. In its wake Go Ape, a witty entrepreneurial outfit as you can gather, has built a treetop adventure facility, cost of involvement £18 – 33 per child.

Amongst her comments she notes,

I like it when companies give me the metaphors ready-made. Makes my job so much easier. They should probably charge me. “It’s a considered purchase,” says the managing director [of Go Ape], Jerome Mayhew, of the astronomical fee. “But I’d rather spend money getting my children outside doing something fun, physical and adventurous than buying them an Xbox.”

Let’s spend a moment unpacking that, shall we? Consider it the last gift of the festive season. “It’s a considered purchase” means “we acknowledge that it’s a shedload of cash” – especially for something that used to be free – “but we think there are enough local people who can scrape it together to make our presence here commercially viable.” The rest can go swing.

“But I’d rather spend money getting my children outside … than buying them an Xbox.” A nice cluster of false oppositions here, and Mayhew is to be applauded for cramming so many into so few words. Here we have, seamlessly imported, the idea that money can only be spent either buying children time outside or supplying them with devilishly unhealthy devices. That parents either want the best for their children or just an easy life. That you either spend money on your children or fail them. Neatly snipped out of the picture is any conception of people without money or of worthwhile experiences to be had without money changing hands.

Apologies to Playgrounds Uncut that I’ve only just discovered their Facebook Page with information and details of their campaign. It  includes this excellent radio interview with Paul Hocker of London Play.